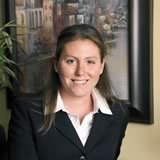 Suzie has been recognized as a SuperLawyer “Rising Star” in 2011 and 2012.  In 2013 Suzie was named a Top Woman Attorney in Massachusetts.

She is a graduate of Suffolk University Law School in Boston, Massachusetts and of Saint Michael’s College in Colchester, Vermont.  In her spare time, Suzie enjoys golf, snowboarding, travel and is an avid Boston sports fan.